Behind the Scenes: The RSS Drama Club 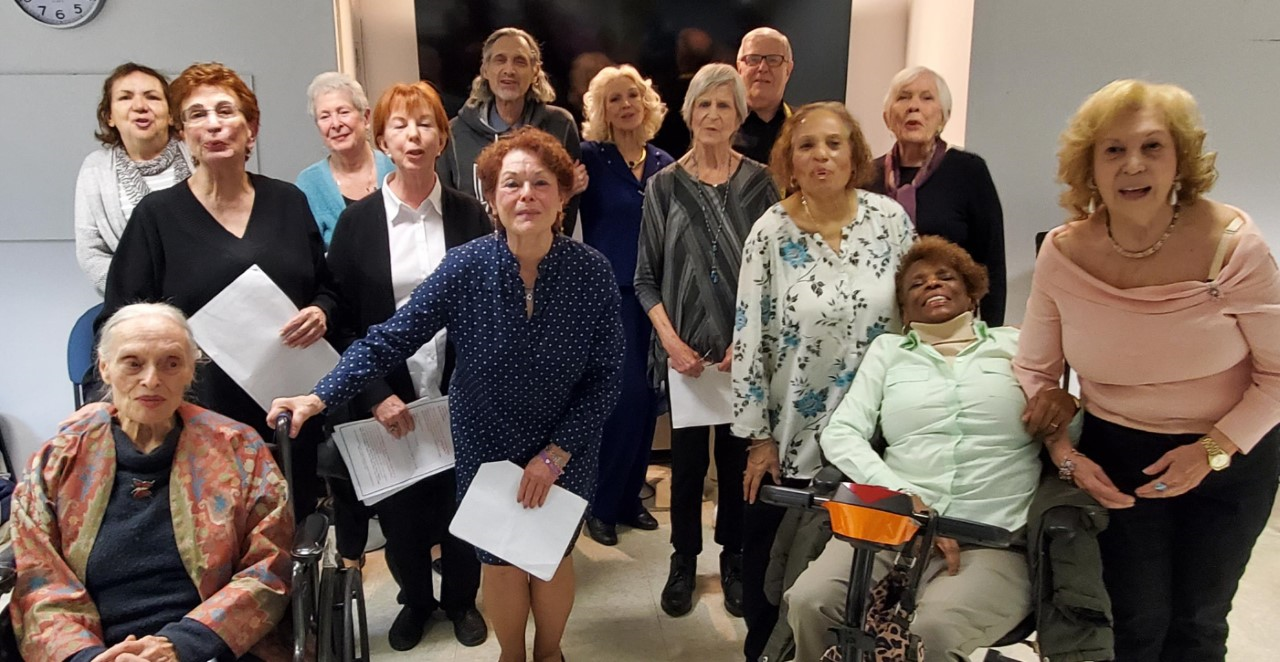 Every Wednesday at 10 AM a dozen or so RSS members meet to read plays, sing together, and to socialize. I sat in on the RSS Drama Club, as an observer and an occasional participant, in order to understand the nuts and bolts of acting in a small theater ensemble. I was interested in the individual performers, and their motivations for participating in this particular group.

The first time I came to observe, the club was preparing for an upcoming Holiday Show. They had only a few sessions to practice Christmas Carols and several traditional readings.  They ran through everything at least once and I could not figure out how it would all come together in time for the performance.  As I watched them from the back of the room, my impression was that they were having too good a time rehearsing for the show. Shouldn’t they be as anxious as I am about it turning out? Was I hearing way too much laughter here? How come they joke around so much? I expected a drama club to be so much more serious.

Someone forgot their lines in “A Christmas Carol”. Another person chimed at the wrong time.  Repeated practice yielded somewhat better results. Not perfect, but acceptable.  What struck me was the group’s reaction; mistakes did not seem to be a big deal. They were often the cause of all the laughter. The group members did not appear to judge each other or feel embarrassed if they made mistakes. How refreshing!

The RSS Drama Club is led by Jeanie Bowers, a professional actress, and a trained opera soprano.  Jeanie created the role of Maria in the 1982 Tony award-winning musical, Nine. She appeared on All My Children, Another World, and One Life to Live. Her Molson Beer & Ale commercial won a CLIO award. She has numerous summer stock credits.

Jeanie’s connection to RSS began in 2017 on a whim. She lived in the Century building and having passed by its awning so many times was curious to see what the RSS had to offer. She instantly charmed a staff member who recruited her as a teacher.  Jeannie threw herself into her new role, utilizing her vast experience, her outgoing personality and her vast library of scripts and music.

Jeanie’s mission is to encourage seniors to express themselves. She’s an activist giving an invisible population a voice. In her opinion, older adults need to be empowered to speak their minds. Participation in theater gives them permission to shout and be their stronger selves.

Some members of the group experience obvious challenges such as mobility issues or hearing loss, as well as challenges that are not as readily visible. Jeanie makes sure to spotlight the abilities of the actors rather than their disabilities. In this group, everybody gets a chance to be heard, whether or not they are speaking from a wheelchair or need amplification to carry their voice.

Jeanie makes sure each member has a part to play, no matter how small. She also tries to find plays that are interesting to everyone in the group. In one session the group may rehearsed excerpts from “Gigi”, “Fiddler on the Roof”, “Witness for the Prosecution” and “Murder on the Orient Express”. These plays were chosen because they have a number of roles to play and they have an element of humor in them.

The members come from diverse cultural backgrounds and have varied performing experience. Being in the group enables some to reconnect to the theater, others have a chance to perform for the first time, and all to socialize with interesting people. The common denominator among the group members is that they are there to have fun. They joke with another, laugh at their own mistakes, fool around and laugh a lot. It sounds so simple, but what they like most about the group is that it is a lot of fun.

For those members of the group with acting experience participation in the group has reconnected them to a youthful passion. Some novices are thrilled to overcome the fear of performing in front of an audience. Introverts are now opening up in class and finding their voices outside of class. One member loves coming to the drama group because “the seniors bring a sense of joy”.

This sense of joy Is easily transmitted to the stage. Last Fall the drama club performed their variety show “There’s No Business-Like Show Business” to an enthusiastic audience at Riverdale Senior Services. Fourteen actors read original poems, and acted out scenes from various works ranging from “Painting Churches” to “Fiddler on the Roof”.  The following week they entertained the residents at Shervier Nursing Center, who enjoyed the funnier bits, such as Abbott and Costello’s “Who’s on First”.

Jeanie possesses the knack of finding parts that match the quirks and the strengths of the individual actors. Larry McCarthy, a natural-born storyteller and former bartender entertained the audience with an amusing story from his childhood. Shirley Keegan and Robert Ackerson were well cast as Miss Daisy and her driver Hoke, in an excerpt from “Driving Miss Daisy.”

Robert, a retired educator, has been with the drama group since its inception. He values the camaraderie of the group. In fact, he describes them as family. He attributes the success of the group to Jeanie’s “tough love” approach. For instance, she will not hesitate to call you out if you have not practiced your lines. Robert also appreciates learning the craft of acting from a seasoned theater veteran.

Sarah Hecht is a group member who has had professional acting experience. In addition to her day job working for a New York City child welfare agency, she acted in commercials, for Polaroid, Quaker Oats, and Ex-Lax. She acted in experimental theater with her husband, who was an amateur playwright. Now retired, she gets satisfaction from acting the RSS Drama Club.

Most recently the group performed for the Women’s Circle Holiday Party. Despite the limited amount of rehearsal time the actors came through with an excellent program of holiday themed pieces. They shined in the spotlight. Program highlights were an adorable “Santa Baby” by Susan Simon (inspired by the Eartha Kitt version), a reading of “Night Before Christmas” with excellent sound effects by Larry and Robert, and an adaptation of “The Christmas Carol”, with the members of the group performing multiple roles. Susan Goldman expertly read “Hershel and the Hanukkah Goblins “.  The audience followed intensely as the actors performed a reading of the O’Henry classic “The Gift of the Magi”.

The RSS Drama Club is now rehearsing for a special program for Mother’s Day. Plan on attending and sharing their infectious enthusiasm.