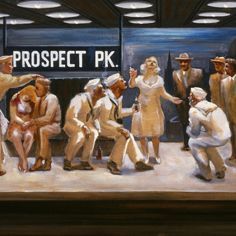 During World War II, New York City produced everything from battleships to brassieres, and more than three million troops and over 63 million tons of supplies passed through New York Harbor en route to the battlefield. In this interactive virtual presentation, hear little-known stories such as how a group of German saboteurs landed on Long Island only to take the LIRR in the wrong direction, and why a portion of the FDR Drive is built atop rubble from Bristol, England.