The Space Race: Look Back in History 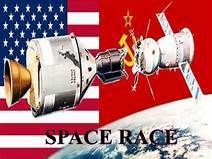 On July 20, 1969, Neil Armstrong popped up a hatch and went down a ladder. In seconds, he put his foot on the moon. It was the culmination of what President John F. Kennedy wanted in 1961. A man on the moon. But the space programs rooted went back to World War II. America accepted Nazi Germany scientists and eventually started work on a program to explore space. The space program and space race took place during the Cold War between the US and USSR. There were many successes and failures including the Apollo 1 spacecraft command module catching fire on the launch pad in 1967 killing three astronauts. Man would visit the moon five more times after Apollo 11. The last trek was in 1972..

Evan is a speaker, author, with a radio and TV background. In 2007, the Department of State sent him to talk to foreign nationals at the George Bush Presidential Library in College Station, Texas to speak about the politics of sports business in America. Evan has also appeared on programs on the former WBIS, Channel 31 (New York, N.Y.), RNN (New York), the History Channel with Al Michaels and Frank Deford, as well as ABCNews Now’s Politics Live TV show with Sam Donaldson, CN8’s sports program and the BBC Radio Documentary Sports and Sponsorship, and MSNBC-TV.