So Ready for Laughter: Bob Hope and World War II Presented by the NY Historical Society 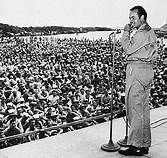 The New-York Historical Society celebrates the golden age of comedy with So Ready for Laughter: Bob Hope and World War II. Organized by The National WWII Museum in New Orleans and supported by the Bob & Dolores Hope Foundation, the special exhibition highlights the legendary performer and his unique role during World War II entertaining troops overseas. Coinciding with the 80th anniversary of the founding of the United Service Organizations (USO), the exhibition features artifacts, films, and rare photographs to illustrate how Hope helped lift spirits both abroad and on the home front with his USO and radio shows during a dark time in American history.

So Ready for Laughter explores Hope’s major USO tours and travels during World War II through some 50 artifacts, including rare and unpublished photographs of Hope; a World War II-era aircraft fragment, mess kit, and other relics engraved to Hope; videos of his traveling, wartime troupe; and Hollywood Victory Caravan programs and scrapbooks.

Here is a short video that you can watch prior to the event - https://youtu.be/hBSC-YFN_To