Dementia and the Family - A Discussion with Peter Swanson 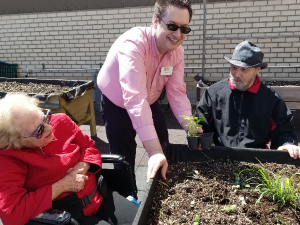 Dementia is a blanket term that relates to a constellation of symptoms that can be connected to different diseases. It's more of a general term. Then there are specific diagnoses like Alzheimer's disease or Lewy body dementia (this was discussed often after Robin Williams committed suicide). Dementia really means limitations in four ways. 1)  Difficulty with language, 2) Difficulty with physical movement, 3) Difficulty with knowing how to do something and 4) Difficulty with perception. So, these four things can make it difficult, if not impossible, without the right kind of support and help to let you be connected to other people and have a sense of purpose and meaningful activity.

When you're suffering from something that creates dementia, you're often left isolated, you're often left bored, and honestly, you're often left depressed. And, if you have dementia, there may be an awareness that you are isolated, that you're not doing much, that your life is not the same as it used to be.  There is often that insight, especially in earlier stages that it's not like it was before. That's where an Adult Day program brings enormous value. It can help to reduce isolation, reduce boredom, and help the depression.

Do you have any suggestions on how family members, friends, and caregivers can talk to and help those with dementia - at an early stage or later on?

The most important thing is to have a sense of compassion, empathy for their situation. You have to see a person as an individual, and not as the diagnosis they have, I think. It can be very easy to define a person in terms of their limitations, or the problems that they have, while essentially missing all of their personality, all of their strengths, everything that makes them who they are. Treat them like a human being with dignity, respect, the way you would treat anyone. Treat them like an adult, as a good friend, as anyone in your family. Just don’t define them in terms of their problem, define them in terms of their humanity.

What does early memory loss mean?

Before we talk about that, it’s important to know that there are some general needs that everyone has, at any point in their life. As we age later in life, maybe are leaving the workforce, or you’ve lost friends, people still really need a sense of connection to other people. We all need a feeling that you belong to a social group. You want to be with people who have common interests. People need a sense of purpose. It's often something that comes from work or from family. You need things that can engage you in many ways - intellectually, socially physically (like exercise). You need a sense of connection to the greater community and to your neighborhood. But when it comes to dementia, you have your limitations that start to make it difficult to meet these needs.

What do you think are the biggest stresses that caregivers have?

It’s not having enough help. working with dementia often means another person has to be involved, especially if there are concerns about safety. That help has to come from somewhere. And there are only so many hours in a day, there's only so much energy a person has to devote. Unfortunately, dementia can mean these things can happen any day or night. And, unfortunately, the reality of our healthcare system is such that we don't provide for this kind of long term care. You have to make yourself poor to get  Medicaid. But that's not a realistic option for many. So they're piecing together what homecare they can afford with programs like RSS Adult Day, and other family members, or friends or neighbors or anything where they're living with the loved one. Basically, they’re doing a lot of it themselves, unpaid. And often unrecognized.

It's extremely difficult. It can feel very hopeless. It's just not enough. It’s just not enough help. And I think that feeling of despair is something that we're here to help alleviate that for caregivers. We offer that safe space and work with their individual situations to try to make a difference.

How did you get involved in working with older adults with memory loss?

What we do here is very personal to me. About 15 years ago, my grandfather was diagnosed with Parkinson's disease. He lived far from me so it was tough. Then he suffered a fall and needed surgery. And, he never really recovered after that. He was in residential care from that point forward in his life. This went on for several years until he died at 84. The Parkinson's created several dementia-related symptoms that Parkinson's can create, particularly difficulty in articulating language and using language. And, all the mobility issues. The care that he got, was just simply not meeting his secondary needs that are as important as medical needs. Things like social connection needs, like a sense of purpose and belonging. Those psychological needs were largely absent. A similar situation happened with my grandmother when she had a stroke, and also ended up in residential care and suffered similarly in terms of the lack of opportunities to really connect with other people.

I felt I could make an impact as a professional in this way. So I went back to school to get a Masters in Social Work, moved to New York. I came to RSS five years ago to have an impact in terms of improving the well being of people even if they have an illness, that has taken much away from them.

The RSS Adult Day Program for Memory Loss is here to help.